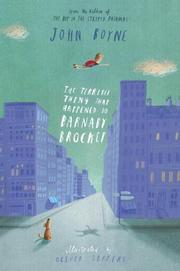 THE TERRIBLE THING THAT HAPPENED TO BARNABY BROCKET

Barnaby Brocket has been defying the laws of gravity since the day he was born. Now, at the ripe old age of 8, his life continues to be ruled by this fact: If he’s not held down by outside forces, he floats.

And as if that wasn’t enough of a problem, he also happens to have been born into “the most normal family who ever lived in the Southern Hemisphere.” Unfortunately, his mother and father have about as much compassion as the Dursleys of Harry Potter fame or the Wormwood parents in Roald Dahl’s Matilda. They are so obsessed with maintaining normality that they not only send him to “The Graveling Academy for Unwanted Children,” but are led to do something even more perfectly awful and unparentlike, which changes the course of Barnaby’s life forever. Boyne (The Boy in the Striped Pajamas, 2006) is no stranger to difficult topics and uses this fanciful tale to explore being different and how to cope with it with wit and imagination. On his sometimes harrowing and fantastical odyssey back to his Australian home, Barnaby meets an amazing array of people similarly rejected by their families. All of his experiences ultimately prove to be character-building, if repetitive in their themes.

A story of self-empowerment told with wry humor and purpose.