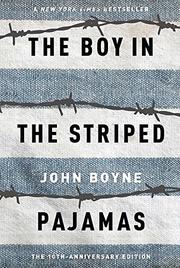 THE BOY IN THE STRIPED PAJAMAS

After Hitler appoints Bruno’s father commandant of Auschwitz, Bruno (nine) is unhappy with his new surroundings compared to the luxury of his home in Berlin.

The literal-minded Bruno, with amazingly little political and social awareness, never gains comprehension of the prisoners (all in “striped pajamas”) or the malignant nature of the death camp. He overcomes loneliness and isolation only when he discovers another boy, Shmuel, on the other side of the camp’s fence. For months, the two meet, becoming secret best friends even though they can never play together. Although Bruno’s family corrects him, he childishly calls the camp “Out-With” and the Fuhrer “Fury.” As a literary device, it could be said to be credibly rooted in Bruno’s consistent, guileless characterization, though it’s difficult to believe in reality. The tragic story’s point of view is unique: the corrosive effect of brutality on Nazi family life as seen through the eyes of a naïf. Some will believe that the fable form, in which the illogical may serve the objective of moral instruction, succeeds in Boyne’s narrative; others will believe it was the wrong choice.

Certain to provoke controversy and difficult to see as a book for children, who could easily miss the painful point.