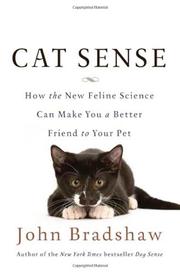 Bradshaw (Dog Sense: How the New Science of Dog Behavior Can Make You a Better Friend to Your Pet, 2011) worries about the future of domestic cats, “the most popular pet in the world today.” Until recently, their tendency to hunt small prey, such as mice and snakes, has added to their value for homeowners, overshadowing their predatory behavior toward small animals and birds. Not so today, as the decline of wild species has become an increasing concern. Historically, dogs and cats have been valued for different qualities, and their paths to domestication were also different. Dogs evolved from relatively tame wolves that lived in packs. They readily worked in tandem with humans as hunters, herders and guard dogs. Cats evolved from solitary, wild cats that defended their own territories. The author traces their domestication to the Middle East and the agrarian revolution. As grains were stored, house mice evolved to take advantage of the food supply, and cats were attracted by the opportunity to hunt the mice. They were valued as exterminators, but their kittens were adopted as pets. Bradshaw contends that although urban house cats are affectionate and can appear more independent and easier to manage, owners frequently do not pay sufficient attention to their socialization. While dogs befriend unrelated dogs, cats do not; therefore, the author suggests that, if possible, two cats from the same litter be placed together. Since their access to the outdoors is being increasingly restricted and, in urban environments, cats are no longer needed to control mice, it is important to provide them with companionship and an enriched play environment.