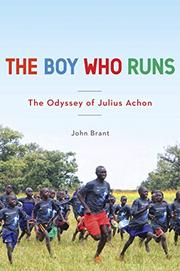 THE BOY WHO RUNS

The Odyssey of Julius Achon

The inspiring life of a Ugandan middle-distance runner and his journey from bush village to Olympic hopeful.

Julius Achon was born during Idi Amin’s terrifying reign. A firstborn son who barely survived a potentially fatal measles outbreak, he became charged with the care of his siblings after being frequently abandoned by his herdsman father, who spent the family’s meager income on alcohol and gambling. At age 12, Achon was captured by the Lord’s Resistance Army and physically and mentally primed for combat. His already “sinuous, efficient, straight-backed stride” and fierce running speed allowed him to escape during an ambush attack and return home. In this segment, sports journalist Brant (Duel in the Sun: Alberto Salazar, Dick Beardsley, and America’s Greatest Marathon, 2006) demonstrates his flair for building suspense. Achon’s father advised him to learn to run and “become like John Akii-Bua,” who won the gold medal in the 400-meter hurdles at the 1972 Olympics. Empowered and increasingly fearless, the young man trained relentlessly and began advancing in contests within larger arenas and eventually paid for boarding school. In the mid-1990s, having relocated to America, Achon swiftly ascended the competitive ranks in more challenging races. While attending George Mason University, his coach cautioned him not to become preoccupied with the “African witch-doctor tribal stuff, all this rebel civil war junk” in his past. Professional racing beckoned, as did Olympic trials, but after a bittersweet reunion back in Uganda, a return to the States was dampened by the news of his mother’s violent death at the hands of the LRA. Achon refocused himself with more philanthropic endeavors, including a children’s fund financed by a businessman eager to construct an ultramodern medical facility back in Uganda. With breezy, accessible prose, Brant’s profile incorporates African history and insider details on the physical demands of race-running, strategies for success, and how Achon personally paved the way for others like him to succeed with pride and humanitarianism both on the track and in everyday life.

A bright, uplifting biography about determination and giving back.