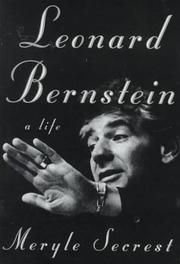  Another big Lenny B. bio, jam-packed with accomplishment and angst. This is not a terrible book, and there are occasional passages of nice insight. Ultimately, however, the limitations that biographer Secrest admits at the outset prove to be too much for her. She is not a music historian, her previous subjects mostly having been figures from architecture and the visual arts (Frank Lloyd Wright, 1992, etc.), and her self-professed inability to evaluate Bernstein as composer exacerbates the inherent difficulties of writing his life so soon after his death. ``Various family members, close friends, and colleagues'' refused to talk to her because the Bernstein estate was contracted to another biographer (presumably Humphrey Burton, author of Leonard Bernstein, p. 260); for the same reason, she did not have access to the ``vast Bernstein archives.'' There were, of course, still plenty of folks who would talk (and talk and talk) to her about the maestro, and they had a lot to say, on every now-familiar subject from L.B.'s ambivalent sexuality to his podium manners, his business acumen, and his skills as father and teacher. If it were not for the thematic and chronological connective passages that display Secrest's skill as a biographer, the book could be called Reminiscences on Bernstein. Predictably, not all of the lengthy, sometimes rambling, quotations are of equal merit; all are self- interested and some don't make sense. We hear much about Bernstein's conflicts--conducting vs. composing, his attraction to men vs. women--but in the absence of an overview of his creative legacy (which simply may not be possible at this early date), the reader winds up feeling merely exhausted by Lenny's energy level. Another book for the growing shelf from which some Maynard Solomon or musical Walter Jackson Bate will have to winnow when the time comes to write a critical biography rather than the Bernstein story. (100 b&w photos) (First printing of 35,000)

THE MYSTERIOUS AFFAIR AT OLIVETTI
by Meryle Secrest
Nonfiction

SOMEWHERE FOR ME
by Meryle Secrest
Nonfiction