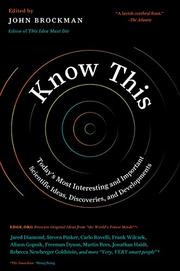 Today's Most Interesting and Important Scientific Ideas, Discoveries, and Developments

The latest installment of the editor and literary agent’s near-yearly anthology of brief essays on a specific scientific theme or subject.

Brockman (Life: The Leading Edge of Evolutionary Biology, Genetics, Anthropology, and Environmental Science, 2016, etc.), publisher of the science website Edge.org, poses a question to a few hundred world intellectuals, mostly scientists. Perhaps because he is also a leading literary agent, most dutifully respond, including stars such as Freeman Dyson, Steven Pinker, and Lisa Randall. Here, Brockman reveals 197 delightfully short answers to the question, “what do you consider the most interesting recent scientific news?” Readers of the first dozen will assume the answer is global warming until they realize that Brockman sorts them by topic, and dozens of physicists arrive to air their frustration with dark matter, dark energy, and quantum gravity as well as their disappointment with the great Large Hadron Collider. Other topics include the manipulation of genes, which has become dazzlingly easy; the innumerable planets that orbit distant stars; big data and artificial intelligence, both of which are exploding but not always in a good way. As usual, a minority of the contributors answer a question they’d prefer to answer or merely muse. Weather prediction has quietly become really accurate; the platinum rule (do unto others as they would have you do unto them) is superior to the golden. There are some jolts. An amazing number of published scientific studies can’t be reproduced, and cold fusion, long dismissed by the establishment, gets a good word. Among the dozens of well-known contributors are Mario Livio, Lee Smolin, Jared Diamond, A.C. Grayling, Alison Gopnik, and Amanda Gefter.

It’s difficult to be turgid in a microessay (one paragraph to four, rarely five, pages); a few academics manage, but most deliver lucid intellectual hors d'oeuvres that deserve rereading.