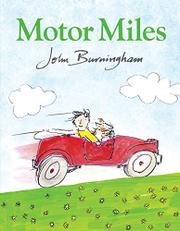 Miles, a dog, learns to drive his own car, and everything changes.

From Burningham’s first droll lines paired with his expressively simple illustration, readers will know they are in for a rare treat—a book whose strong substance and story eschew gimmick and gloss and whose mastery of visual and narrative understatement shines throughout. Miles, the dog protagonist, is a difficult dog to live with, only enjoying trips “in the car up the hill to the café.” Miles’ owner, Alice Trudge, cannot be spending her days driving Miles to the café, so her neighbor, Mr. Huddy, offers to build Miles his own car. In a hilarious sequence of vignettes, Miles learns to drive, and after he has mastered it, Miles and Norman, Alice Trudge’s son, begin to take secret trips—to the ocean in early morning, through leaves in autumn, out in the countryside. It is hard to overstate the sheer aliveness with which Burningham, in a few artful pen, pastel, and watercolor strokes, manages to imbue his characters; Miles and Norman fairly brim with whimsical life. Miles becomes a happier, less difficult dog even after he gives up driving when Norman outgrows the small, dog-sized car—but Mr. Huddy may have another surprise in store for the two. The named human characters are all white, but they inhabit a multiracial world.