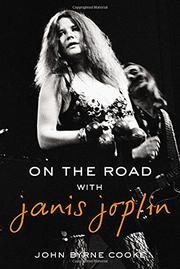 ON THE ROAD WITH JANIS JOPLIN

A memoir of the author’s time working for the spellbinding Janis Joplin.

Most of the action in former road manager Cooke’s narrative takes place in venues like Monterey, the Chelsea Hotel and the Haight, but it’s when Joplin is at home in the Lone Star State, among straights and squares and beehive-haired classmates, that Cooke’s account takes off: “Most of her classmates look older than her,” he writes of an ill-fated reunion. “It’s as if the last time they had fun was in high school and they don’t expect to have fun ever again.” Though fretful, fearful and worn down by her well-known dependencies on the needle and the bottle, Joplin was all about making fun for herself and those around her, and though there’s a certain inevitability throughout these pages that things aren’t going to end well, Joplin emerges as someone we all might like to have known. That said, there’s also a gulf between Cooke and his subject; part has to do with her reserve and her unwillingness to get involved with an employee (airplane make-out sessions notwithstanding), but part has to do with Cooke’s failure to be in the right place at the right time. He chose not to stay at the Chelsea (“a decision I will later regret”), set up house on North Beach rather than in the Haight and otherwise exercised counter-countercultural tendencies (“I’m a beatnik, not a hippie”) that led Big Brother and company to hold him at arm’s length. Still, if his portrait of Joplin herself doesn’t shed much new light, Cooke is good on the politics of the music business and the decisions that might not have been in her best interests.

Significant for ardent devotees of Joplin; less than essential for others.