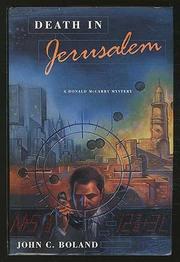 Partly out of idle curiosity about Agritech Consultants, the new Israeli venture his slick pal Harry Brickman, of Morgenstern Ozick, is trying to raise money for, partly to avoid worrying about a rumored shake-up back in his own Wall St. office, commodities trader Donald McCarry agrees to accompany Harry to the Holy Land, ostensibly to look over the operation. Bad move. En route to Harry's villa in the Occupied Territories, their car is hijacked and Harry kidnapped. And the day after Donald—peacefully ensconced back in Jerusalem's King David Hotel while Harry's partners and wife burn up the transatlantic wires—meets Agritech president Dov Levy and his gorgeous assistant, Esther Sennesh, Israeli security people pull him off his return flight, a suspect in Dov's murder. Something's obviously rotten at Agritech. But if it's only Harry's fraudulent scheme to trick the Israeli government into providing a safety net for Agritech's speculators, then why are Esther and Harry (miraculously escaped from his captors) gunned down in a professional-looking street attack? And why does a quick check of Morgenstern Ozick's books back in New York reveal a shortfall the size of the Israeli national debt? Boland (Rich Man's Blood, 1993) deftly balances political terrorists and guys who just have their hands in your pockets in a tale that roars along like a BMW in heat.