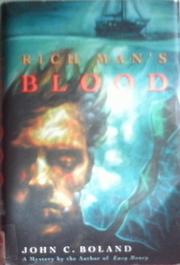 When a slick-talking Texan's financial shenanigans lead Stu Harris's New Orleans marine company to the brink of bankruptcy, young Richard Welles—Harris's financial advisor at venerable Ambrose and Welles, investment bankers—steps in and, with FBI help, extricates Stu from Charlie Fentress's scheme, which included blackmail, kidnapping, and strong-arm tactics. Months later, when Ambrose and Welles itself is about to be drained of its assets by wealthy Gibson Island newcomer Simon Povane and his gorgeous daughter Lauren, Richard thinks he recognizes a pattern and attempts to dismantle a financial hustle that spreads from Baltimore to London to Australia—but not without incurring more bad feeling between himself and his father and older brother, who have, unknowingly, ushered the family firm toward ruin. The FBI, Stu Harris, and shipboard derring-do will come into play before the bad guys (and girl) succumb. Boland, who thinks like Paul Erdman and writes like Dick Francis, creates a winsome hero in Welles—and again (after Easy Money, 1991) scores big with this tale of complicated money maneuvering and family strife.