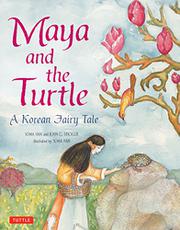 MAYA AND THE TURTLE

An original folk tale set in Korea tells the story of a selfless young maiden who is sacrificed to the monster in the neighboring village.

This story begins at the deathbed of Maya’s mother. In a weak voice, the mother tells her daughter that she will grow up to become a princess. From this point, the authors combine elements from a number of popular Korean folk tales to write their own story. The core of the story (a girl sacrifices herself to aid her ailing father) is both strong from a plot point and a significant theme in Korean tales, but there are many distractions that create puzzling questions by the end. The relationship between Maya and her pet turtle, an expected cornerstone given the title of the story, drops dead when the heroic turtle does, without even a shred of gratitude from Maya. The story arc seems to be missing a main ending as the self-sacrifice story turns into a lingering and forced love story. The story is supplemented by notes, sometimes footnoted within the text, with cultural information explaining uniquely Korean facts, but these become highly distracting. This could have been a much-needed addition to the shelves, but it cannot overcome a meandering plot with characters that lack dimension.