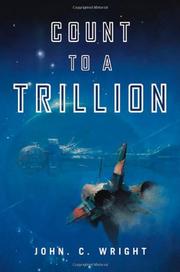 COUNT TO A TRILLION

In the 23rd century, on an Earth exhausted by wars, climate change and other ills, young mathematical genius Menelaus Montrose grows up in Texas and becomes a duelist to support his mother and siblings. Meanwhile, a robot starship now 50 light-years distant and orbiting a star made of antimatter—potentially an inexhaustible source of energy—reports a monument carved with symbols that appears to be a gift of enormously advanced knowledge. So a second starship, this time with Menelaus and other geniuses aboard, travels for a closer look. Secretly, however, Menelaus has used part of the monument's wisdom to prepare a serum which, so he hopes, will boost his brain into super-genius mode. It has the desired effect, but unfortunately he goes insane. Years pass as if in a dream. Menelaus wakes to find he's back on Earth. His old crewmate "Blackie" Del Azarchel has declared himself dictator, using deadly antimatter beams to enforce his will, and now intends to construct a super-intelligent artificial brain, the Iron Ghost, patterned after his own mind. Blackie drugs Menelaus back into genius mode to finish the job. But even Blackie fears the mysterious Princess, apparently born on the starship even though no women were aboard. Menelaus begins to realize that almost everything Blackie has told him is a lie. And what if the monument is actually a trap? Spectacularly clever, sometimes, in weaving together cutting edge speculation along the outer fringes of known science, but more often grindingly didactic, with no narrative flow and three genius protagonists all unpleasantly cold and unsympathetic: a case of everybody knowing everything but nobody knowing anything. Highly impressive but indigestible: something like a vastly promising first draft that needed a lot more work.