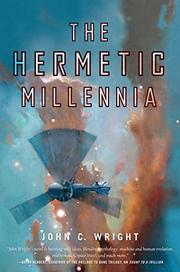 Thanks to the discovery of an alien storehouse of knowledge and source of energy, former Texas gunslinger Menelaus Montrose transformed himself into a supergenius. Unfortunately, so did his colleagues who, led by Zimen “Blackie” Del Azarchel, desire only to rule the Earth. Menelaus tried but failed to prevent them. However, aliens known as the Domination of Hyades regard themselves as Earth’s overlords, and in 8,000 years, they will arrive to take ownership. Blackie and company, then, intend to force the development of a suitably advanced yet compliantly slave-worthy population. Menelaus’ wife, meanwhile, is heading at near-light speed for a remote globular star cluster in order to confront the Hyades’ bosses’ bosses. She will, of course, arrive back at Earth 50,000 years too late to prevent the Hyades’ occupation, so somehow Menelaus must prevent the slavers from exterminating humanity until she arrives. Menelaus arranges to enter cryonic suspension, with instructions to wake him periodically so he can gauge what Blackie and his co-conspirators have been up to and, hopefully, counteract them. When he wakes, however, Menelaus discovers that the tombs where he and others were preserved have been ripped open and plundered by Blackie’s Blue Men minions—merely the latest example of Blackie’s efforts to create ideal subjects for the Hyades. So: An impressive torrent of information, factual, extrapolative and speculative, explicated via a series of dazzlingly erudite conversations that build weird post-humans into recognizable characters. Oh, and a plot that goes nowhere at all.

Astonishing stuff that leaves readers with plenty of work to do.