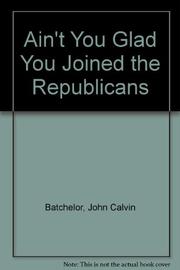 “AIN'T YOU GLAD YOU JOINED THE REPUBLICANS?”

A Short History of the GOP

Novelist Batchelor's (Father's Day, 1994, etc.) history of the Republican Party is as complete, informative, and stimulating as an eighth-grade civics text. Near the beginning of this strangely subdued paean to the GOP, Batchelor describes its 1854 birth as ``a revolutionary rising against the status quo of human bondage.'' The phrase promises grand vistas, not the flat landscape that follows, rendered in near-monochrome. Batchelor's meticulous history includes a chapter on each quadrennial election, complete with bios, snippets from speeches, platform reviews, and election results. Even Batchelor's partisanship is hampered by a style so flat, it's sometimes hard to distinguish praise from irony, as when he writes of the 1894 campaign, ``A vote for the Republicans was a vote for the American smokestack, for the American farm, for the America fireside, for all American profit''; or when he says that George Bush ``pushed Moscow and its puppet states . . . into the dustbin of history.'' The book begs for the why and how to go with its generous servings of who, what, and where. For example, why, after 100 years, did the GOP yield its role as champion of civil rights and women's rights to the Democrats? What is the link between Abraham Lincoln and Newt Gingrich? Batchelor quotes and then requotes Gingrich at the end of the book: ``The Republican party . . . has an obligation to be positive on behalf of the values of the American people,'' as if to say this is the ideal linking Lincoln to McKinley to Eisenhower to Reagan. But the phrase, even twice italicized, hangs unadorned and unexplained, like the rest of the book. An almanac filled with more than one cares to know about the Republican Party, and less than one wants to understand; an almanac written by a novelist, devoid of the novelist's God's-eye view. (b&w illustrations, not seen) (First printing of 50,000)