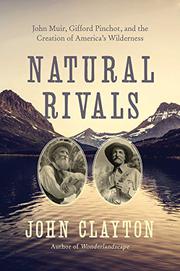 America’s battle over conservation vs. preservation.

Clayton (Wonderlandscape: Yellowstone National Park and the Evolution of an American Cultural Icon, 2017, etc.) divides his timely book into two parts: the relationship between friends and rivals John Muir (1838-1914) and Gifford Pinchot (1865-1946) and the dense underbrush of events, debates, bills, and laws regarding how America would protect public lands “that demonstrate our society’s relationship with nature.” Muir, co-founder of the Sierra Club, was a prolific author, scientist, and political activist who helped protect Yosemite. He was raised in an evangelical farming family but slowly turned away from it, passionately appreciating God through the works of nature. Pinchot’s family was wealthy. He dreamed of becoming America’s first forester and served as President Theodore Roosevelt’s chief adviser on environmental issues. Muir too was friends with the nature-loving president. Pinchot went on to found the U.S. Forest Service in 1905. Clayton looks at the issue of public lands through the lens of these two, seemingly like-minded men: prophet vs. statesman, a romantic vs. a practical man, and Muir’s moral authority vs. Pinchot’s tactical genius. As the author shows, they were collaborative rivals, each offering “alternative paths to articulating a constructive societal relationship to nature.” He uses the battle over damming Yosemite’s Hetch Hetchy Valley to provide water to San Francisco as a key factor in understanding the Muir-Pinchot rivalry. Muir fought hard against it; Pinchot acquiesced. Muir lost. Ultimately, “their friendship was drowned under a reservoir.” The book is populated with a number of fascinating figures: Frederick Law Olmsted; co-editor of The Century magazine, Robert Underwood Johnson; and Aldo Leopold, who argued for balancing the use of public land with sustainable logging and water supplies. Today, Clayton writes, we need a “visionary management framework,” not “culture wars.”

A substantial contribution to understanding our environmental past.