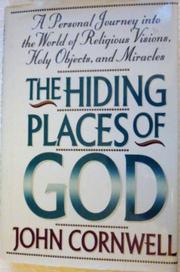 THE HIDING PLACES OF GOD

In his excellent A Thief in the Night (1989), Cornwell looked into rumors that Pope John Paul I had been murdered. Here, the former seminarian conducts a yet more subtle and meaningful investigation—of the ``incidence and significance...of paranormal religious phenomena'': flying monks, weeping statues, divine apparitions, and the like. A professed agnostic, Cornwell a few years ago found his nonbelief undermined when he experienced a prophetic ``religious dream.'' His curiosity aroused, he set off on a worldwide hunt for earthly signs of a divine hand, beginning with a visit to the Yugoslavian town of Medjugorje, where, for years, three children have allegedly been conversing daily with the Virgin Mary. Although repulsed by the commercialization of the phenomenon—with souvenir- vendors and millions of tourists creating a ``spiritual Disneyland''—Cornwell found the sight of the children ``speaking silently'' to the invisible Virgin ``truly astonishing,'' with one girl's eyes seeming ``to shine with an unearthly light.'' But what to make of this? And of his subsequent experiences, including witnessing the stigmata of a Montreal recluse, the liquefaction of the dried blood of St Januarius in Naples, and the devotion inspired by the alleged miracles of Padre Pio (healing, stigmata, bilocation)—and, on the dark side, the terror of a man supposedly possessed by evil incarnate? As a journalist, Cornwell's trained skepticism compels him to dig out mundane, generally psychological, explanations for nearly all; and yet he finds himself profoundly moved by the ``symbolic'' power of these ``miracles,'' declaring- -especially after soul-stirring meetings with Briege McKenna, a nun with an apparent gift of healing—that the importance of ``prodigies'' lies not in whether they offer ``supernatural `evidence,' '' but how potent they are as living ``symbols'' of the ``religious imagination.'' An affecting personal spiritual memoir as well as a tantalizing tour through the miraculous, which reveals its mystery- -if not its secret—under Cornwell's fresh and compassionate gaze.