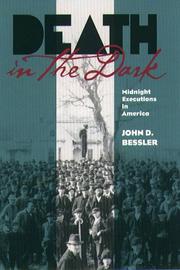 DEATH IN THE DARK

A lawyer argues that Americans do not know enough about how death sentences are carried out and that the way to learn about them is to let TV cameras into the execution chamber. As the title indicates, executions usually take place between midnight and sunrise, before a small number of witnesses. This, says Bessler, who has assisted in the pro bono representation of four death-row inmates, largely accounts for declining interest in this society's most solemn punishment. It allows us to keep out of sight and out of mind the more gruesome aspects of execution, especially when the process goes awry. Also, more insidiously, it allows us—from politicians who endorse the death penalty as a way of seeming tough on crime to jurors who sentence a criminal to death—to evade a sense of responsibility for taking another's life. To allow better- informed public debate on the issue, he argues, we should be able to see executions on television, which delivers ``unfiltered images'' and ``objectively record[s]'' what is before the cameras—claims that are astonishingly naive. The history of public executions, private executions, and related legislation and court cases (given, at some points, in extraneous detail) suggests that there is no way of reliably predicting our response to such telecasts. Some viewers are likely to be horrified, some outraged, and some entertained. Moreover, neither proponents nor opponents of the death penalty can be entirely certain such exposure will swell their ranks. Regardless, says Bessler, let people see what goes on. Bessler is convincing when he argues that we need more light on the subject of the death penalty, but he fails to make a case that the flickering TV screen will cast more light than heat. (illustrations, not seen) (For another study of the death penalty, see Mark Costanzo, Just Revenge: Costs and Consequences of the Death Penalty, p. 1428.)