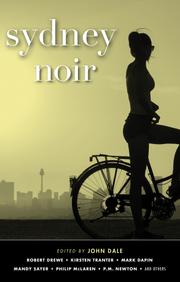 These stories tend to focus on actual crimes rather than on the poverty, misfortune, and deprivation that are often noir staples. Of course, Dale showcases some peeks at the low life. There’s a smattering of drug capers like Peter Doyle’s “Good Bloke” and Tom Gilling’s “Rip-Off,” and Leigh Redhead shows an exotic dancer taking a lap dance a little too far in “The Transmutation of Sex.” But even folks from Sydney’s upper crust can get into the act, as Kristen Tranter shows in “The Passenger.” Talent is no proof against bad acts and actors, as a nationally ranked swimmer learns in Robert Drewe’s “The Razor,” an acclaimed architect finds out in Mark Dapin’s “In the Court of the Lion King,” and a budding designer discovers in Julie Koh’s “The Patternmaker.” In addition, any number of ordinary folks blunder their ways into wrongdoing. In Eleanor Limprecht’s “In the Dunes,” a single dad’s struggle to raise a teenage girl ends badly. And in editor Dale’s “Good Boy, Bad Girl,” a young woman with aspirations finds a sinister way to take care of her aging grandmother. The emphasis on crime stories lays the groundwork for some pretty neat surprises. Mandy Sayer’s “The Birthday Present” and P.M. Newton’s “Chinaman’s Beach” both pack a wallop in the crime-with-a-twist department.

Although Dale’s approach is traditional, the stories he’s assembled offer ample variety in this cavalcade of crime Down Under.