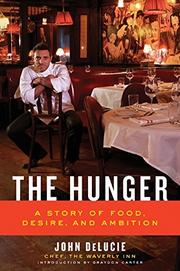 A Story of Food, Desire, and Ambition

Co-founded by Vanity Fair editor Graydon Carter, the Waverly is best known for its celebrity clientele and the throngs of paparazzi lurking outside the door. But the food cooked under DeLucie’s watchful eye holds its own against the restaurant’s often picky patrons. From the Inn’s famous hamburger and trademark truffle-coated mac and cheese, to the roasted carrots ordered daily by Karl Lagerfeld, DeLucie’s experience has been a study in improvisation and adaptation, much like his culinary education. The author was a self-described corporate drone when, at the age of 30, he decided to follow his Italian heritage into the kitchen. After taking cooking classes at the New School, DeLucie started preparing food at Dean & DeLuca and moved from restaurant to restaurant, rising from a lowly crouton-maker to poissonnerie, sous chef and finally executive chef. Along the way, his personal life often paid the price for the hectic schedule his culinary life demanded. His portraits of the unique personalities that inhabit the kitchen are delightful, and his emphasis on the teamwork and leadership required to run a successful restaurant is inspiring. Though there are celebrity-driven anecdotes sprinkled throughout the text, the story never becomes gossipy. Unfortunately, DeLucie’s own distinct palate and culinary inspirations sometimes get lost in the narrative—to its detriment, as his descriptions of the food are the most interesting passages.

A colorful vignette of New York’s cutthroat culinary scene by a qualified insider.