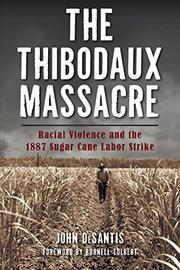 A little-known massacre is brought to light.

In 1887, the tumultuous elements of the recent past—slavery, sharecropping, a new movement in unionizing workers, etc.—came together in Thibodaux, Louisiana, in a devastating manner, as the tension between plantation owners and poorly paid workers led to a strike on sugar plantations. Threats during the strike turned into a mass murder of black workers so hushed by the media and overlooked by society that to this day, the actual number of deaths is unknown. Journalist DeSantis (The New Untouchables: How America Sanctions Police Violence, 1994, etc.) spent more than a decade trying to peel back the layers of history to shed light on what locals referred to as the Thibodaux Massacre. The author is the first to acknowledge that in 10 years of research, he was able to learn surprisingly little about the killings, but when new information came to light in the form of direct accounts contained in a pension file, it formed the basis of the story he presents here. It is perhaps the seasoned reporter’s drive for hard facts and the bigger picture that work against DeSantis, because in the final product, they act to obscure the crime at the center of the book. Though the massacre itself lasted only hours, that is the story the author strives to impart, and details about those hours take up precious little space in the narrative. Without the pieces that lend color to the crime itself, DeSantis relies heavily on historical details instead. Some of these quite obviously lend context to the massacre, helping readers understand the tensions that existed and how the situation came to a head. Other information, though, seems tangential and distracting. Though well-written, informative, and interesting, the book lacks a clear focus on the crime at its heart.

A better choice for Southern history buffs than for true-crime junkies.