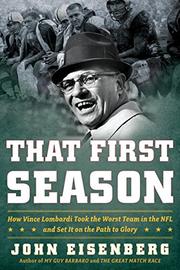 Former Baltimore Sun sports columnist Eisenberg (The Great Match Race: When North Met South in America’s First Sports Spectacle, 2006, etc.) looks back at 1959, a year that witnessed one of the more momentous turnarounds in NFL history. In his first season as a head coach, Lombardi took the one of the worst football teams ever and led it to its first winning season in more than a decade. Having sunk to 1-10-1 under Scooter McLean the year before, the 1959 Packers were expected to win no more than three or four games, but Lombardi righted the ship, steering them to a 7-5 record that year and initiating their run to six championships during his nine-year tenure as head coach. How the stout, brash Brooklyn native was able to transform a directionless assemblage of players into a gridiron behemoth is as much the subject of Eisenberg’s exhaustively researched account as his thrilling description of each game. Relying on period articles and interviews with key players from the Lombardi dynasty, the author convincingly shows that the coach’s fierce work ethic, militaristic-style training camps, perfectionist tendencies, belief in fitness and ability to instill confidence in his players were as central to the team’s metamorphosis as his brilliance as a game-play strategist. Though his “sarcastic, critical” coaching style didn’t always endear him to the players, when they saw the results of his simple, run-centered offense and powerful zone defense, he soon won their trust.

A must-read for Packer and Lombardi fans, and will interest most NFL fans as well.