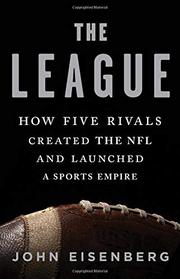 How Five Rivals Created the NFL and Launched a Sports Empire

A rich history of the rise of the National Football League from its virtual obscurity at its genesis in the 1920s to its position as an economic and cultural powerhouse today.

Former Baltimore Sun sportswriter Eisenberg (The Streak: Lou Gehrig, Cal Ripken Jr., and Baseball's Most Historic Record, 2017, etc.) returns with the story of how five owners—George Halas, Bert Bell, George Preston Marshall, Art Rooney, and Tim Mara—refused to give up on the struggling league and lived to see (and cause) its current dominance. Thoroughly researched and gracefully told, the story begins with the background of each of the five, then moves chronologically through the early years of the league—struggles, controversies (among the most significant was the arrival of black players), adjustments (to radio and then TV)—to its full arrival in 1958, when 40 million people watched the Baltimore Colts defeat the New York Giants in the exciting championship game. As the author repeatedly points out, these five were fierce rivals, but they knew that to make the league survive and flourish, they could not destroy one another. So they compromised and changed rules to make the game more exciting; all would live to see the league’s vigorous health. (The final chapter deals with the deaths of each.) Although Eisenberg is admiring of the founders, he also recognizes—and highlights—their weaknesses. Marshall, for example, was a racist, the last to bring blacks onto his team, the Washington Redskins. Although the author provides some details about some key games (and iconic players like Red Grange, Marion Motley, and Sam Huff), the narrative is not a rehearsal of games but of the history of a game, a business, and five men who took a chance, lost money, and then found great success.

An engaging and informative cultural history, on and off the gridiron.