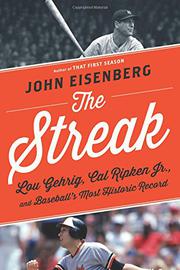 On Sept. 6, 1995, Cal Ripken broke Major League Baseball’s consecutive-game record, which had been held by the legendary New York Yankee Lou Gehrig. Once the game was official, the Baltimore Orioles unfurled a banner that read “2,131,” the number of games he had played without fail. As the roaring crowd (which included President Bill Clinton and Vice President Al Gore) and a national audience watched, teammates pushed Ripken from the dugout onto the field, where the future Hall of Famer took an impromptu lap, slapping hands with fans around the perimeter of Camden Yards. It was an inspiring moment that many believed helped to save baseball after a labor stoppage had cancelled the end of the 1994 season, including the playoffs and World Series, and truncated the 1995 season. Ripken had broken a record once seen as untouchable, a record made all the more resonant because of Gehrig’s tragic death soon after due to amyotrophic lateral sclerosus, a disease that would come to carry his name. Former Baltimore Sun sports columnist Eisenberg (Ten-Gallon War: The NFL’s Cowboys, the AFL’s Texans, and the Feud for Dallas’s Pro Football Future, 2012, etc.) intertwines the stories of Gehrig and Ripken with chapters about baseball’s other iron men and the nature of consecutive-game streaks more generally. It would have been easy for the author to simply celebrate Ripken’s and Gehrig’s records and to couch them in terms of commitment, work ethic, and age-old virtues. But while he does not deny these positive attributes, he also thoughtfully explores why these records resonate, whether they really matter, and if, in some cases, they may be a bit selfish. After all, sometimes a player might serve his team best by taking the occasional day off. It is this aspect of the story that makes the book most valuable.

Eisenberg examines one of baseball’s most venerated records while exploring what it all means, providing a compelling, thought-provoking history for fans of America’s grand game.