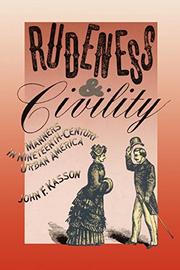 A ranging, provocative, informed, clever, and persuasively argued interpretation of the origin, functions, and development of manners in 19th-century urban America. Kasson (American History/Univ. of North Carolina; Civilizing the Machine: Technology and Republican Values in America 17 76-1900, 1976) describes the development of etiquette as a middle-class response to the new urban and industrial economy and to the excesses of a democratic society. Using fiction, photographs, journalism, architecture, fashion, philosophy, performing arts, and the etiquette books that proliferated after the 1930's, Kasson explains how etiquette contributed to the idea of community, helped to assimilate a diversified and competitive population, and both revealed and concealed character--and also how it was abused: how acquired social skills allowed the counterfeit to infiltrate society and undermine the confidence that polite people had placed in social rituals. To protect the system of recognition and social bonding that etiquette provided, more subtle signs of behavior, status, and character emerged. With them came increased tensions between the values of authenticity and of simulation, of individuality and conformity, of social involvement and detachment--and between public performance and private feeling. This new etiquette, with its implied class ideologies and psychological penalties, was expressed in fashion--in the ritualized and unresponsive ways people interacted at meals or at social functions; in the very architecture and furnishings of their homes; and in recommendations that ladies and gentlemen avoid conflict, public displays of joy, pleasure, anger, affection, and even taste. Kasson concludes by extending his discussion to cultural institutions that were shaped by the new norms of etiquette and that reflected their objective, impersonal, regulated, affluent class values: orchestras, museums, theaters, libraries. An accomplished guide to historical as well as contemporary behavior, what it means and how to decode it.