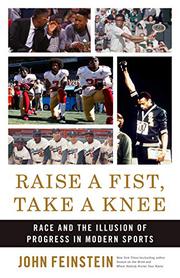 RAISE A FIST, TAKE A KNEE

Race and the Illusion of Progress in Modern Sports

One of our most prolific sportswriters examines race and racism in sports.

Black players are prevalent in many areas of professional and college sports. Of the front office and the coaching staff, writes Feinstein, the representation is more skewed. One of the subjects of this fine book is George Raveling, the pioneering Black coach who took the helm of Washington State’s basketball program in 1972 and led it to two NCAA tournaments. “Where I grew up,” he tells Feinstein, “if you were Black, there wasn’t much chance to dream. It was all about survival.” Nonetheless, during his time at Villanova, Raveling played alongside 10 other Black students, all of whom were exemplary: All graduated in four years, half have doctorates, one earned a gold medal in the Olympics, another headed a major corporation. Given equal opportunities, executive performance by Black and White coaches is, yes, equal. However, as Feinstein notes, only one NFL coach has ever been fired after a 10-6 season, and that one was Lovie Smith, who is Black—even though he had led the Chicago Bears to a Super Bowl and three playoff berths and been named Coach of the Year. Protests sometimes make a mark, but mostly not. Even with the famed case of Colin Kaepernick and the spread of his custom of taking a knee, the result has been mostly White rage. One Sunday soon after Kaepernick’s first protest, Feinstein notes, “more than two hundred NFL players either knelt or stayed in the locker room during the playing of the anthem. The issue came roaring back—which may have been what Trump wanted: make white America angry at Black America.” Racial tension is endemic and at every level of the game. As Feinstein writes near the end, only a few analysts and sportswriters are Black, and no matter what the race, all “are under what amounts to a gag order on air,” forbidden to raise thorny issues.