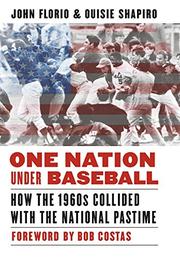 ONE NATION UNDER BASEBALL

How the 1960s Collided with the National Pastime

As social change roiled through the 1960s, Major League Baseball was sometimes a mirror, sometimes a window.

Freelance writer Florio (Blind Moon Alley, 2014, etc.) and documentary producer Shapiro focus on baseball throughout, but they don’t neglect other sports or popular culture. The authors, who co-wrote One Punch from the Promised Land: Leon Spinks, Michael Spinks, and the Myth of the Heavyweight Title (2013), deal with Cassius Clay/Muhammad Ali—his rise, his anti–Vietnam War stance—and, briefly, with the 1968 Summer Olympics and the protests by sprinters Tommie Smith and John Carlos. The Beatles continually pop up, as well, but the authors’ principal interest is in how professional baseball reacted to the social turmoil of the decade. Proceeding chronologically, they highlight certain athletes, using them to illustrate issues ranging from race (black players were growing increasingly unhappy—and vocal—about their status and treatment) to religion (Sandy Koufax would miss a World Series start because of Yom Kippur). We see players battling with management (men who do not come off at all well here), with the Jim Crow South, and with the rise of unionism in the sport. The authors spend some time with Curt Flood’s struggle with baseball’s reserve clause, and they continually remind us of the deep darkness of that decade: the political assassinations, the war, the clashes over civil rights. Sometimes, their focus drifts a bit when there are particularly engaging sports tales to tell—e.g., the amazing years for pitchers Bob Gibson and Denny McLain and the racial frustrations that often animated the performances of Ernie Banks and Dick Allen. The authors interviewed many of the principals and read numerous books written by them; they are especially strong on Jim Bouton’s transformative sports memoir, Ball Four (1970).

Careful, pointed writing shows us that professional sports should not be viewed in isolation from the society in which they function.