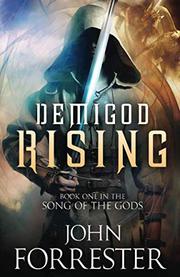 From the Song of the Gods series, volume 1

In this first YA fantasy novel in a series, Forrester (Empire Awakening, 2018, etc.) tells the story of a teen warrior-in-training searching for his family members across a magical realm.

Fifteen-year-old twin brothers Jeno and Chiro are students at Castle Maarn, where their father, Gen. Thanadol, sent them to be trained as rangers by the priests of the god Tanir. One night, the twins awaken after having a nightmare about their mother—from whom their father took them away at age 4; in it, she’s enslaved by an evil wizard in the magical Realm of Sosaram. Jeno shrugs it off and goes back to sleep, but Chiro sneaks away to enter a nearby cave that, according to a gnome they recently met, separates their world from Sosaram. As Jeno angrily rushes to catch up with Chiro, he thinks that “His brother must be out of his mind or afflicted by some charm. Every righteous human knew that magical creatures tricked mortals down paths leading to their doom. It was a core tenet of their faith.” Jeno steps through the portal and is transported to a beautiful world of forests and flowers, although he knows that he must be careful not to be corrupted by its magic. Sosaram proves to be more than just picturesque gardens, however; it’s also a land that’s suffering from war and blight, where elves and dwarves worship ancient gods, and dragons rule the skies. With the help of his best friend (and secret crush) Freyia, as well as some new acquaintances, Jeno pursues his sibling across the dynamic landscape. It later turns out that Sosaram has many surprises in store for Jeno, including one involving his mother that will change everything that he believed about his religion—and about himself. Forrester’s prose is spirited and propulsive, ensuring that readers feel the same thrills and scares that his characters do: “It was a dragon…gazing directly at him. He could feel a faint pressure in his mind, something reaching, something pushing, something calling out to him. The sensation was maddening.” In terms of worldbuilding, characters, and plot, the novel stays in the familiar territory of sword-and-sorcery fantasy, with the requisite YA concerns of parentage and responsibility. Jeno is a bit of a spoilsport, but the supporting cast—including the aforementioned Freyia; Shani, a wood-elf healer who’s willing to cut off her own finger to save a stranger; and Karn, a loudly dressed half elf known as the “king of these streets”—provides more enjoyable companionship. The religious angle, which pits the magical polytheism of Sosaram against the anti-magic monotheism of Jeno’s world, adds another layer of tension, but it’ll be easy for readers to predict the outcome of that struggle. The breakneck pacing, after the exposition-choked opening chapter, consistently pulls readers forward and quickly immerses them in the world’s politics and conflicts. Aficionados of YA fantasy should enjoy this offering and the sequels that are sure to follow.

A brisk and readable fantasy tale that casts a familiar spell.