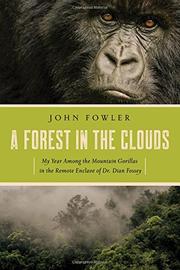 A FOREST IN THE CLOUDS

My Year Among the Mountain Gorillas in the Remote Enclave of Dr. Dian Fossey

"Who was this woman who could leave behind so many murder suspects?” So asks one-time apprentice Fowler of Dian Fossey, the renowned and supremely difficult primatologist.

After a year of working with Fossey, who was murdered in her forest hut in Rwanda in 1985, the author recounts that he returned to the U.S. a little shell-shocked though missing the forest preserve where he worked with her in her study of wild gorilla populations. To his new colleagues at a stateside zoo, he said only, “Dian was kind of difficult to work with.” This book is a long—indeed, somewhat too long—commentary that puts a point on that observation. Fossey felt embattled by challenges to the fiefdom she had created in the rainforest; poachers were a constant menace to the gorillas that lived there, but it did not help that she seems to have suspected just about every African person she encountered. Her paranoia mounted, as did her fear of black magic, “the stuff of African lore in which someone might put a curse on you.” It did not help, either, that she took to drinking heavily and was abrasive and confrontational even when sober. Readers take the point of Fossey’s deep unpleasantness early on, so Fowler’s repeated assessments get a little tiresome as the catalog builds. More interesting are his notes on fieldwork among the gorillas of the Karisoke Research Center, whose personalities he found less challenging and frightful than his employer’s. One highlight involves separating himself from a baby gorilla that had become too attached to him and that reacts with a gigantic scream: “She was having a tantrum…a meltdown!” Fowler even ventures a little sleuthing as to the identity of Fossey’s killer, whom he suggests was someone trusted enough to have come inside her dwelling unsuspected.

A little goes a long way here. Of interest, though, to students of field science as well as devotees of Gorillas in the Mist.