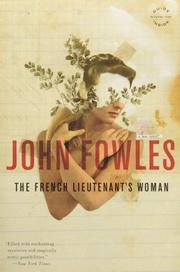 Mr. Fowles has written a Victorian novel. An eminently Victorian novel filled with the hindsights of many of its more recent commentators (Marcus, et al) as well as his own amplifying asides as he appears in the wings to interrupt the narrative with a sometimes magisterial disregard for its progression. But then, certainly for the first two thirds, this is not so much a novel as a portrait of an era as heavily burdened with duty and piety and conformity as with marble and mahogany. What story there is (and some of Fowles' readers will perhaps regret its yielding to edification) deals with the tri-cornered relationship between Charles Smithson, Ernestina, his fiancee, and Sarah Woodruff, reputed and professing to be a French Lieutenant's discarded woman. Charles is a wellborn young man of scientific bent and dilettante pursuits; Ernestina, up from trade, is petulant, conventional and well endowed; while Sarah, briefly taken in as a companion to an old tartar who sacks her, is mistily romantic as she takes solitary walks. Charles tries and fails to resist her. By the close, after having introduced his readers to just about every aspect of Victorian life on several levels and to the ideas then in ferment (not only Darwin and Marx and Freud but also Hardy and Matthew Arnold and Tennyson) Mr. Fowles is back again in form and the drama intensifies with all the false starts and wrong turns and stunning reverses which he handles so well. Period parody or pastiche, it again reveals Fowles' manifest erudition as well as understanding of the unhallowed virtues of this opening dosed society.