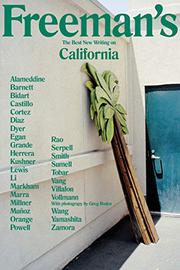 Freeman was raised in Sacramento, and his sensibility is personal but also collective in the sense that he has thought deeply about the state. “California,” he writes in his introduction to this sixth issue of his eponymous literary journal, “has for a long time been seen as the Valhalla of far-flung dreams.…California is also, however, the site of real people’s homes.…This schism—between what California represents in popular imagination and what it is, what it means to live there, to be from there—means Californians collide constantly with the rupture of existence.” Such a notion animates the 30 pieces of prose and poetry gathered here. The work is wide-ranging, by newcomers and established talents: Xuan Juliana Wang, Elaine Castillo, Frank Bidart, D.A. Powell. It tells the story of California in pieces, which is the only way it can be told. Jaime Cortez writes of fire and evacuation: “It occurs to me that in unison, millions of us are inhaling the sofas and ottomans of Paradise, the cars and gas stations of it, the trees and lawns, the clothes and detergent, the wedding pictures and divorce papers, the cadavers.” Héctor Tobar imagines a boy left alone so often by his working mother that she no longer needs to warn him, “Don’t turn on the stove or play with matches. Don’t open the door if anyone knocks. Don’t play with the electrical plugs.” Both writers are addressing what we might call ordinary peril—or more accurately, the necessity of doing what we have to do. Such a requirement sits at the center of California life. Some of the work touches on the broader myths by which the state is often stereotyped: Jennifer Egan on post-1960s San Francisco, Geoff Dyer on cannabis culture, Rachel Kushner on cars. But even here, the focus is on the idiosyncratic, the individual, rather than on the cliché. “We have not talked about your transcendence,” former poet laureate Juan Felipe Herrera insists in “California Brown,” a poem that recapitulates, in part, the state’s virulent racial history, “we have not talked about the forces of power / ripped into your bones & flamed out of your face.” The point—or one of them—is that, in California, one must learn to persevere.

In this collection, California in all its glorious complexity comes vividly to life.