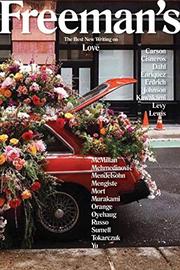 The seventh volume of Freeman’s eponymous literary journal “celebrates” love, which the former Granta editor calls “the biggest and most complex emotion.”

For many readers today, love is also scarce, since, as Freeman notes in his introduction, “It’s a hard time to believe in love.” Several of these 21 works of fiction, nonfiction, and poetry are indeed worth celebrating, especially short stories by Olga Tokarczuk and Gunnhild Øyehaug, whose “Apples,” which charts a woman’s changing loves via a nifty nested narrative, is the volume’s best piece. Nearly half the works eschew romance in favor of either an amorphous love, such as Louise Erdrich’s poem “Stone Love,” about a rock that has “spent a star age...Waiting for you,” or familial love, including Tommy Orange’s brief tour de force, “Guangzhou,” and Daisy Johnson’s standout short story, “The Snowman,” in which a 14-year-old crafts a muddy Christmas golem for her dying sister. “Heaven,” an enthralling excerpt from Mieko Kawakami’s forthcoming novel, captures that same childhood mystique that Johnson channels so well but buries the dread deeper. The anthology’s main shortcoming, and a puzzling one given its theme, is the near total absence of writing about LGBTQ+ love. Fully three-quarters of the volume concerns love between a cisgender man and woman. There are just two entries—totaling eight pages—about nonheterosexual relationships: Daniel Mendelsohn’s piece on how insomnia takes him places his lovers can never follow and Andrew McMillan’s spectacular poem “swan,” about grappling with his sexuality. Also conspicuous is the lack of any Black male authors, an omission exacerbated by the inclusion of stale stories from Richard Russo and Haruki Murakami, neither of whom is crafting terribly original fiction or wanting for an audience at this point in their lengthy careers.

Some wonderful writing props up a volume that fails to convey modern love’s scope or diversity.