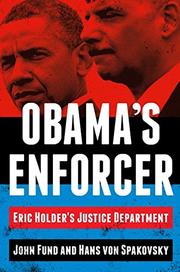 Fund and von Spakovsky (Who's Counting?: How Fraudsters and Bureaucrats Put Your Vote at Risk, 2012) team up again for a no-holds-barred assault on Attorney General Eric Holder.

Both authors are well-known shapers of conservative opinion, and von Spakovsky, of George W. Bush’s Justice Department, so the authors include certain ongoing issues promoted by the right. These include, among others, the 2009-2011 “Operation Fast and Furious” gunwalking scandal, during which the Justice Department and the Bureau of Alcohol, Tobacco, Firearms and Explosives were investigated for distributing weapons in Mexico subsequently used with deadly effect against American border enforcement agents. As a result, Holder became the first attorney general in history to be held in contempt of Congress, but Democrats voted overwhelmingly in support of Holder. What Fund and von Spakovsky have put together in this account seems to merit thoughtful consideration rather than peremptory dismissal as yet another partisan assault. For example, they ask why Holder's accounts of when he learned about the gunwalking scandal differed significantly in the versions he presented before the House and the Senate—and the differences have not been reconciled. The authors point to numerous Supreme Court decisions that question the legality and honesty of actions undertaken by Holder's department, and they discuss a number of criminal and civil prosecutions that have been dismissed for prosecutorial misconduct, including lying and withholding exculpatory evidence. Fund and von Spakovsky also question his practice of unilaterally changing interpretations of laws—e.g., the 1961 Interstate Wire Act. The authors detail the chilling effects of censorship and raise some intriguing issues about the conduct of the Justice Department’s civil rights division.

The book leans decidedly to the right, but Fund and von Spakovsky raise issues of partisan intrigue, dishonesty and criminality, with sufficient evidence to merit serious investigation and not just partisan dismissal.