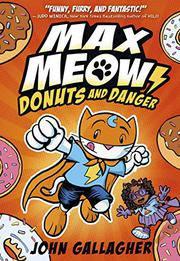 From the Max Meow series, volume 2

Max and Mindy are back in action and must face old foes and nefarious new look-alikes.

Max Meow, feline resident of Kittyopolis, is secretly the superhero Cat Crusader, and he’s excited to no longer work solo. His BSFF (Best Science Friend Forever), brown-skinned human Mindy, has gained powers and created her own superhero persona, Science Kitty. Problem is, she puts so much pressure on herself to be perfect that she’s too scared to be a hero out in public. When havoc is wreaked at Food Fest, followed by a series of robberies, not only is the world of donut sales in peril, but the whole city is in danger. Old and new villains team up, and Cat Crusader will need Science Kitty’s skills—even if they are imperfect—in order to save the day and the donuts. This book tries to do a lot and isn’t always successful: An overabundance of plot points and characters makes it lack focus and overall cohesion. The more the story progresses, the messier and more jumbled it becomes, bogging down the pace. The lesson about the pitfalls of perfectionism does add some depth, and the brightly colored cartoon art plus the combination of silliness, science, and superpowers make this tale inviting. Fans of the first book may enjoy spending more time with these cool cats, but hopefully their next adventure will be smoother.