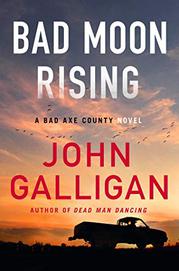 Rural Wisconsin is darker than you might think in the third gripping mystery featuring a young woman sheriff.

Sheriff Heidi Kick has seen murder victims before. Even in Wisconsin’s Bad Axe County (or maybe especially there), people kill each other. But she’s never before seen one who looks like he crawled back out of the grave. Besides a coat of dirt, this dead man has two gunshot wounds, one boot, one bare foot, and no name. That’s also rare, since the sheriff knows almost everyone in her sparsely populated jurisdiction. As Heidi tries to find out who the man is and how he ended up dead in a ditch, Leroy “Grape” Fanta begins to suspect the stranger’s death might be connected to a string of unhinged letters and calls he’s received from someone who signs himself “FROM HELL HOLLOW.” Leroy, a Vietnam vet, has served as the dedicated editor-in-chief of the town’s newspaper for 43 years. But no more—he’s been fired, and the paper’s been turned into a shopper. Leroy and Heidi are friends who share a nemesis: Babette Rickreiner, a rich widow with a mean mouth and a dictator’s personality. She bought Leroy’s paper, and her spoiled, vicious son, Barry, is running against Heidi in the sheriff’s election with all the cheap tricks he can muster. Heidi tries to ignore them and do her job. From the site where the murder victim was found, she follows a trail of empty beer cans to a remote farm where she finds a young woman, dressed in the plain clothing of the Amish, passed out drunk and an older man nearly dead in the outhouse. Things accelerate from there for both Heidi and Leroy. Heidi has worries at home, too. She and her good-guy husband, Harley, have three kids, and Taylor, one of their twin sons, is acting out in unusual and worrying ways. And Heidi just might be pregnant again. This is the third book in Galligan’s series about Heidi, who has become a solidly engaging character amid a small-town swarm of strange folks. The plot is gritty and propulsive, the prose well crafted, the finale satisfyingly bizarre.

Intriguing characters take a wild ride through backwoods Wisconsin in this irresistible mystery.