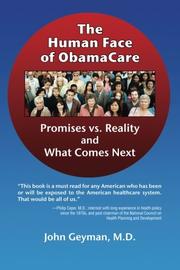 The Human Face of ObamaCare

Promises vs. Reality and What Comes Next

America’s medical system faces severe and worsening problems under ObamaCare and can only be cured by a revolutionary turn toward public health insurance, according to this exposé.

Geyman (Souls on a Walk, 2012, etc.), a medical school professor and former editor of the Journal of the American Board of Family Medicine, argues that while the number of uninsured has dropped because of the 2010 Affordable Care Act, spiraling costs and a decline in quality have left many Americans with unaffordable, inadequate, and insecure health care. He notes that tens of millions still go without insurance; that soaring deductibles and copayments mean that even insured patients often face crippling bills or have to forgo needed care and drugs; and that out-of-network fees and other fine-print gotchas result in huge unanticipated costs that still bankrupt families. Meanwhile, he contends, insurance companies have reduced their coverage and drastically restricted patients’ ability to choose their own hospitals and physicians, requiring them to drop their longtime doctors in favor of strangers and endure long waits because shrunken provider networks don’t have practitioners who can treat them. Geyman pulls no punches in detailing the failings of ObamaCare, but he’s equally hard on the market-based reforms of Republican opponents of the system (“If the Republicans have their way, individuals and families might pay less for skimpy insurance products, but would pay much more for necessary health care”). Instead, he fingers profit-driven health care as the root of the problem and advocates a Canadian-style, single-payer National Health Insurance program funded entirely by the government and delivered by private, not-for-profit hospitals and doctor groups. Geyman’s lucid and very readable (though sometimes repetitive) treatise has plenty of statistics to back up his arguments. But its heart is a series of individual health care horror stories wherein ordinary families find that ObamaCare promises of affordable treatments, universal access, and a choice of providers prove to be hollow. (One patient Geyman profiles was slapped with a $117,000 bill when an out-of-network consulting surgeon he had never met was called in while he was unconscious during a neck operation—a fee his insurer refused to pay.) The result is a smart, savvy analysis that shows the human cost of a broken system.