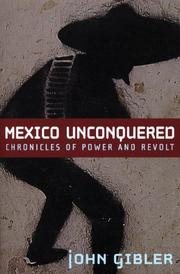 Chronicles of Power and Revolt

A dense chronicle of indigenous struggle in Mexico from journalist Gibler.

The author begins by noting that the Spanish conquest did not eliminate the original inhabitants, but rather subdued them. Although 90 percent of the indigenous population in Mexico perished from “violence, disease and forced labor,” 62 distinct groups survived. These groups now make up 13 percent of the total population and “continue to be the most marginalized, vulnerable, and poor sector.” The divisions among social classes in Mexico are pronounced, stemming from many barriers established from the time of Spanish rule, such as the injunction against the owning of property by indigenous groups. Today, the disenfranchisement of the poor remains embedded, as evidenced in the “gulf” Gibler carefully delineates between the wealthiest and most destitute citizens, exacerbated by recent milestones such as Carlos Salinas’s disastrous privatization schemes and signing of NAFTA. The author looks at the role of the United States in terms of its continued “economic imperialism,” which includes the displacement of people from Mexican industries and agriculture through migration, and collusion in the lucrative system of drug violence and corruption. Gibler then studies various indigenous uprisings that have sought to reclaim autonomy: in Oaxaca, where teachers took the lead in organizing demonstrations of civil disobedience in 2006; in Chiapas, where a ragtag army of indigenous insurgents called the Zapatista Army of National Liberation rebelled in 1994; and in the creation of the principality San Juan Copala in the Triqui region of Oaxaca in response to the pressure to strip the Triquis of their land. Gibler employs a murky mixture of history, personal tales of resistance, academic quotes and ardent persuasion in his rallying cry for a “radical equality of inclusion.”

Well-informed, but more of a fervent screed than a well-rounded study.