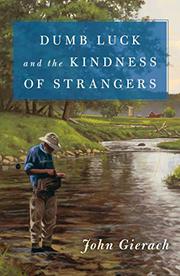 DUMB LUCK AND THE KINDNESS OF STRANGERS

The latest collection of interrelated essays by the veteran fishing writer.

As in his previous books—from The View From Rat Lake through All Fishermen Are Liars—Gierach hones in on the ups and downs of fishing, and those looking for how-to tips will find plenty here on rods, flies, guides, streams, and pretty much everything else that informs the fishing life. It is the everything else that has earned Gierach the following of fellow writers and legions of readers who may not even fish but are drawn to his musings on community, culture, the natural world, and the seasons of life. In one representatively poetic passage, he writes, “it was a chilly fall afternoon with the leaves changing, the current whispering, and a pale moon in a daytime sky. The river seemed inscrutable, but alive with possibility.” Gierach writes about both patience and process, and he describes the long spells between catches as the fisherman’s equivalent of writer’s block. Even when catching fish is the point, it almost seems beside the point (anglers will understand that sentiment): At the end of one essay, he writes, “I was cold, bored, hungry, and fishless, but there was still nowhere else I’d have rather been—something anyone who fishes will understand.” Most readers will be profoundly moved by the meditation on mortality within the blandly titled “Up in Michigan,” a character study of a man dying of cancer. Though the author had known and been fishing with him for three decades, his reticence kept anyone from knowing him too well. Still, writes Gierach, “I came to think of [his] glancing pronouncements as Michigan haiku: brief, no more than obliquely revealing, and oddly beautiful.” Ultimately, the man was focused on settling accounts, getting in one last fishing trip, and then planning to “sit in the sun and think things over until it’s time for hospice.”

In these insightfully droll essays, Gierach shows us how fishing offers plenty of time to think things over.