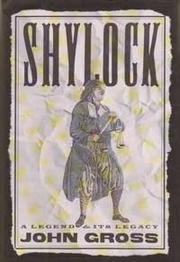 A Legend and Its Legacy

Shylock—stereotype, archetype, icon—is, according to London Sunday Telegram theater-critic Gross (The Rise and Fall of the Man of Letters), the only character in a Shakespeare play to have an autonomous life. By tracing Shylock's origins and forms in literature, theater, and political and social history, Gross emphasizes his chameleonlike nature and what it reveals about the cultures in which he appears. An object of fun, contempt, pity, and rage, Shylock first appeared as the ``Satanic Jew''—the evil figure to be overcome—in The Merchant of Venice, written between 1596-98. An archetypal usurer with origins in folklore, politics, and popular culture, he embodied, says Gross, the era's ambiguities toward Jews, money, misers, and, on another level, toward emerging Economic Man, embodied in Shylock as a tough-minded businessman caught up in the court system and unable to protect his family or what he perceives as his rights. In the 18th century, Shylock was played as a clown, or as wolfish and cunning, until Edmund Kean's consummate interpretation in his London debut in 1814, a performance admired and immortalized by Hazlitt for the sympathy it evoked. A Victorian interpretation by Henry Irving displayed a Shylock possessed, the victim of persecution. Since then, Gross contends, literary critics from A.C. Bradley to Mark Van Doren, novelists from Sir Walter Scott to James Joyce, social theorists including Ruskin and Marx, psychologists from Freud to Reich, and all the great actors- -Gielgud, O'Toole, Olivier—have contributed to the evolution of a subtle, conflicted, mysterious Shylock who has acquired the archetypal dimensions of a Don Quixote or Robinson Crusoe. A lucid, perceptive, and learned guide that makes the familiar interesting and the esoteric familiar. A new incarnation for Shylock.