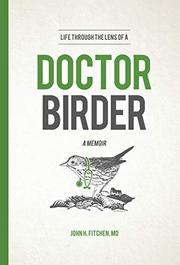 LIFE THROUGH THE LENS OF A DOCTOR BIRDER

In this memoir, a doctor reflects on a life devoted to academic medicine and, later, to his passion for birding.

Born in upstate New York, Fitchen (Birding Portland and Multnomah County, 2014) discovered his love of nature early on. When he was 8 years old, his father, “a professor of fine arts and a scholar of Gothic architecture,” taught him the art of catching and collecting butterflies. That year, the author accompanied his parents on a tour of European Gothic cathedrals. His fascination with the beautiful glass mosaic windows remained with him when he observed an “erythroleukemic” bone marrow sample on a microscope slide during a medical school externship in Oregon: “Looking at the glorious images and resplendent colors was like beholding the stained glass at Chartres Cathedral—stained marrow/stained glass.” It was a professional turning point for him: He decided that he wanted to specialize in academic medicine. After his graduation from medical school, a stint in the Air Force as a flight surgeon, and a residency back in Oregon came a prestigious hematology/oncology fellowship at UCLA. In 1981, he returned to Oregon and joined the Veterans Administration. But before leaving California, he recorded the sighting of his first “life bird.” It would be decades before he could immerse himself in this second passion, with a trip to Attu on the farthest reaches of the Aleutian Islands, “the holy grail of North American birding.” Fitchen is a veteran writer—who has published articles in both medical and birding journals—and his memoir is articulate and detailed, filled with engaging personal anecdotes. But it is also encumbered by the author’s extensive use of professional jargon, although he does include parenthetical layperson’s explanations. Each chapter ends with a notation describing one of the birds he has added to his lifetime total. The final quarter of the book can serve as a useful primer for aspiring birders. And there is much to be learned here about the inner workings of academic medicine, including how Fitchen and his team acquired FDA approval for their breakthrough “oral fluid testing system” for HIV.

An informative, unusual, occasionally challenging, and generally amiable account by a physician and nature lover.