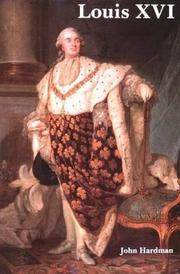 In a political, impersonal, and defensive biography, Hardman (a retired lecturer in modern history at the Univ. of Edinburgh) claims that Louis XVI, reputedly ""stupid, lazy, and impassive,"" was merely reticent, timid, ill-advised, lonely, and misunderstood--and could have been called ""Louis the Silent."" Born into a sprawling, extravagant, and unpopular monarchy, orphaned at age 11, Louis--private, shy, immature, and the least favored and least prepared heir to the throne--ascended to his kingship at age 19, when his grandfather died. Louis liked woodworking, hunting, and playing with locks, maps, and his young and frivolous wife, Marie Antoinette--against whom, according to Hardman, the king spent his life defending himself. Louis would have been a better king if the powers of the ""absolute"" monarchy had really emended beyond merely waging war and conducting foreign diplomacy, or if he were not by tradition forced to depend on advisors of unequal ability and with secret agendas. Louis's own plan would have saved France and, of course, himself--a plan for a constitutional monarchy like England's, which was unsuccessfully presented to the Estates General in 1787. To the general reader, the final pages of Hardman's book, covering from 1787 to Louis's execution, may be more absorbing that the early political analyses, although the material is familiar: the controversy surrounding the Constitution of 1791; the progressive humiliation of the king as he attempts to compromise with the inexperienced National Assembly; the defections; the plots to discredit him; his imprisonments, flights, scholarly habits, family relations, and religious faith; and the futile attempts to salvage his dignity. Admirable for its primary political research--but lacking the warmth, color, and human dimensions of Carolly Erickson's To the Scaffold (1991), a Marie Antoinette biography offering a fuller, more balanced, and sympathetic picture of Louis and his court.