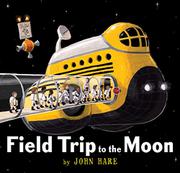 FIELD TRIP TO THE MOON

Left behind when the space bus departs, a child discovers that the moon isn’t as lifeless as it looks.

While the rest of the space-suited class follows the teacher like ducklings, one laggard carrying crayons and a sketchbook sits down to draw our home planet floating overhead, falls asleep, and wakes to see the bus zooming off. The bright yellow bus, the gaggle of playful field-trippers, and even the dull gray boulders strewn over the equally dull gray lunar surface have a rounded solidity suggestive of Plasticine models in Hare’s wordless but cinematic scenes…as do the rubbery, one-eyed, dull gray creatures (think: those stress-busting dolls with ears that pop out when squeezed) that emerge from the regolith. The mutual shock lasts but a moment before the lunarians eagerly grab the proffered crayons to brighten the bland gray setting with silly designs. The creatures dive into the dust when the bus swoops back down but pop up to exchange goodbye waves with the errant child, who turns out to be an olive-skinned kid with a mop of brown hair last seen drawing one of their new friends with the one crayon—gray, of course—left in the box. Body language is expressive enough in this debut outing to make a verbal narrative superfluous.

A close encounter of the best kind.