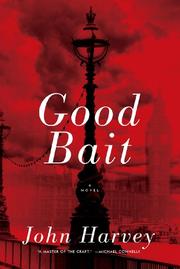 Forget what you had planned for today; the new Harvey comes first.

What possible connection could the teen’s body found on Hampstead Heath have with the woman’s remains splattered over the Finsbury Park subway tracks? As DCI Karen Shields soon learns, the 17-year-old, a native of the Republic of Moldova, had been romancing a girl whose father, a career criminal, disapproved. DI Trevor Cordon, plodding along down in Cornwall, finds himself personally involved in the tube tragedy when it turns out that the dead woman had asked his help in locating her vanished daughter and, when he demurred, went up to London to find her herself. With an assist from private eye Jack Kiley, Cordon locates the missing Letitia and her son and resolves to protect them from a cadre of Ukrainian brothers, the worst of them, Anton Kosach, involved with drugs, prostitution, slave trafficking, gunrunning and more—a laundry list of felonies clearly familiar to whoever killed the Hampstead Heath victim. Shields, a black woman constantly confronting sexism and racism in the force, and Cordon, a divorced loner yearning for a relationship with Letitia, never actually meet, but their cases collide in the halls of power where heavyweights from the Metropolitan Police, the Serious Organized Crime Agency and the Secret Intelligence Service are planning to take down a consortium of Eastern Europeans brutalizing Great Britain. Justice triumphs, but for Harvey, this hardly constitutes a happy ending for all.

The remarkable output of Harvey, whose 100-plus titles (Far Cry, 2010, etc.) have earned him the CWA Cartier Diamond Dagger Award, represents the best of British crime writing.