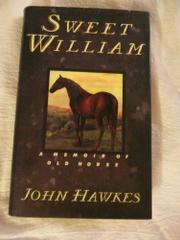 A Memoir of Old Horse

Hawkes's readers have watched him use horses (or stand-ins for them) time after time; in the 1988 Whistlejacket, the equine finally became a subject of its own in a novel about horse-as-object and horse-as-subject. The latter has developed into this book, in which a horse—Sweet William, name changed later to Petrarch—narrates the story of his life. That life, as you'd expect from Hawkes, is one of periodic violent traumas and gothic cruelties: his mother being killed soon after she gives birth (the putting-down is botched; the horse is buried alive, struggles from its grave, and must be put-down again); a brief and physically painful racing career; the humiliation of a dude ranch; finally, the comic eccentricity of being stabled in the gentleman's farm of Master, a milquetoasty but kind virgin who's lorded over by his Irish stablehand Ralph. The story lurches onward, amounting to very little—other than to wrap fond authorial observations about the life of a horse in fancy-pants prose that it's hard to credit direct-in-action Sweet William with (``A large storm, a quiet storm, for the old horse strange and familiar all at once, freighted as it is with the shapes and shadows of recovered youth. Yet sinister in its steadiness, its resolution, its promise that it might not stop until the lot of us—horses, cats, men, barns—have been effaced in nothing less than total obliteration''). Still, the novel ends on one of those notes of epiphanic oddness that Hawkes occasionally does better than almost anyone: Sweet William/Petrarch lives out his last days in the company of a dying goat named Chester: who for a moment, seen from a distance, seems to the horse at first to be—with its aged horn—a unicorn. This section, like a coda of sickness and illusion and redemption, is quite beautiful—though it can't finally tip the balance away from the word-embroidery and fussy stylistics of the rest.