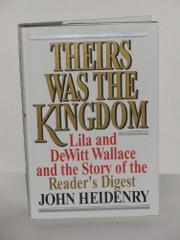 THEIRS WAS THE KINGDOM

The Uncondensed Story of the Reader's Digest and Its Founders, DeWitt and Lila Acheson Wallace

A lengthy, albeit consistently engrossing, take on the Reader's Digest and how it became one of the worlds's most influential periodicals. Drawing on a wealth of sources, Heidenry offers a well-rounded account of how Roy DeWitt Wallace (``Wally'' to intimates) built a farflung communications empire on an idea revived while he recovered from wounds suffered in WW I. Back in the States, the thirtysomething Wally came up with enough money to publish the first edition of Reader's Digest in February 1922. The monthly's format and content, almost immediate hits with middle America, have changed little since then. From its original venue in Manhattan's Greenwich Village, however, RD moved to Pleasantville, an N.Y.C. exurb. In later life, Wally, who had deliberately overstated the editorial role played by his wife, Lila Acheson, to enhance the fledgling journal's drawing power with women, downplayed her apparently negligible contributions. Whoever was responsible, the magazine proved to have mass appeal outside the US, and more than a dozen foreign editions were successfully launched. Though a frequent object of the literary establishment's scorn, RD prospered in good times and bad as the proprietors (who lured name writers with top pay) developed a flair for direct-mail promotion and a willingness to break with tradition, e.g., by opening their pages to advertisers in the mid-50's. RD has survived the death of its founders (both of whom lived into their 90s) in good style, remaining the keystone of a profitable media enterprise with new worlds to conquer in Eastern Europe and beyond. If Heidenry doesn't always endorse the odd amalgam of political conservatism, religious uplift, and double-entendre humor that has made Reader's Digest a perdurable institution, he offers an evenhanded appreciation of its socioeconomic attractions, as well as generally admiring but unsparing portraits of the principals and their key subordinates. As complete a wrap-up, then, as general readers could want on a commercial/cultural phenomenon.