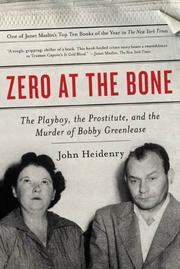 ZERO AT THE BONE

The Playboy, the Prostitute, and the Murder of Bobby Greenlease

The victim was Bobby Greenlease, the six-year-old son of a wealthy Kansas City car dealer. On Sept. 28, the boy was kidnapped by one of the most dysfunctional and tragically inept crime couples on record: Carl Hall, a dissolute sociopath and congenital failure, and his girlfriend Bonnie Heady, an alcoholic and prostitute. Heidenry’s narrative is meticulously detailed and devoid of sentiment or attitudinizing. The horrific actions of Hall and Heady, their outrageous bungling and the web of deceit and betrayal following their crime play out with the cold-eyed terseness and resigned nihilism of classic film noir entertainments like Detour or Born to Kill. After successfully snatching Bobby from his tony private school—an operation that depended heavily on luck—Hall and Heady embarked on a series of snafus that would seem funny if not for the sickening crime at their center. Hall couldn’t even manage to strangle Bobby, as he had planned, because the length of rope he brought was too short. Paranoid and awash in alcohol and drugs, he compulsively complicated plans for the delivery of the ransom money—a staggering $600,000, the largest ever payout—sending the Greenlease’s representatives on a series of wild goose chases undone by Hall’s inability to get an address right or formulate coherent demands. After finally successfully retrieving the money, Hall went on a spending spree, aligning himself with another hardened prostitute and an ex-con cab driver, who quickly cottoned to Hall’s situation and colluded with a prominent mobster and a couple of crooked cops to take the prize for themselves…with predictably botched results. All the while, the distraught Greenleases desperately clung to hope, not knowing that their son was already dead