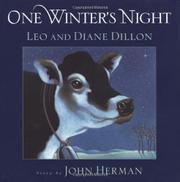 In this poetic Christmas Eve tale, Martha, a young cow about to give birth, seeks shelter, just as Joseph leads Mary, who’s in the same condition, on the same quest. After similar treks through a snowy night, mothers-to-be and parallel plotlines converge in a small shed for the timeless double miracle. Alternating monochromatic vignettes that resemble old-style etchings with larger scenes done with softened lines and muted colors, the Dillons elaborate on hints in the text to set the episode on an abandoned New England or Midwestern farm—relatively recently, to judge from such sparse, small details as a padlock and a cast-iron stove. Herman elevates the tone with occasional flights—“All was blackness. Darkest night. The winds fell from the four corners and shook the earth. Only the icy fire of the stars, distant and brilliant, kept watch in the darkness”—that complement the quiet strength of the illustrations. An old story, in an unusual setting. (Picture book. 6-8)