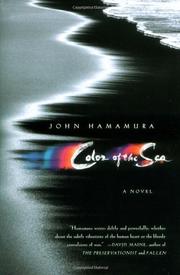 COLOR OF THE SEA

Before and during WWII, Japanese-Americans find both countries inhospitable in this heartfelt debut.

The protagonists are Isamu—later Americanized to Sam—and Keiko, both beautiful, bright and brave, and both tormented by racism. Sam, whose formative years are spent in Hawaii and California, experiences the unvarnished, in-your-face U.S. brand of hate. Keiko, a California girl, suffers the somewhat subtler Japanese variation when she’s taken there by her parents in June 1940. In this tale of two countries, it’s up for grabs as to which form of the disease Hamamura considers more virulent. On the day Pearl Harbor is bombed, Sam, 20, is arrested as an enemy alien, and, together with stunned friends and neighbors, unceremoniously hauled off to prison. In response to their cry of, “Why are you treating us like this, we’re Americans,” the FBI retorts, “No, you’re not, you're Japs.” Transplanted Keiko encounters the kind of arrogance that is the concomitant of nationalistic fervor. Which are you, a teacher demands—American or Japanese? Both, replies a confused, torn 18-year-old, enraging her teacher. For Keiko, challenges to defend boorish America are frequent, and intensifying, of course, when war breaks out. The Japanese attack Pearl Harbor; the U.S. employs the atom bomb; and Sam and Keiko, star-crossed lovers, lead complicated and troubled lives against a turbulent background, searching for identity and ways they can be together.

A poignant, fresh story told with feeling and sincerity.