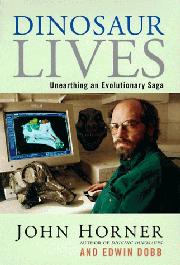 A top dinosaur paleontologist spins wondrous tales about his fieldworkand ponders what it means.

Horner, the curator of paleontology at the Museum of the Rockies and the technical advisor for Steven Spielberg's Jurassic Park and The Lost World (which opens this summer) teams up with a science journalist for a summary of his paleontological work over the last decade. Horner (Digging Dinosaurs) is less interested in unearthing spectacular museum pieces than in learning how dinosaurs lived and responded to their environment. This approach requires examining large numbers of fossils; as a result, Horner prefers to study smaller dinosaurs, whose bones can be excavated more easily than those of the huge sauropods. In fact, he once reburied a skeleton too large to fit in his museum. More attractive to him are nesting areas with dinosaur eggshells and skeletons of juveniles, or sites where large numbers of animals were killed at once, as in a drought. Surprisingly, these abound in the Montana hills. But Horner makes it clear that the fieldwork is only the beginning. The paleontologist's analytical tools include studying the evolutionary relationships of various kinds of animals and new ways to examine the internal structure of the fossilsfor example, microscopic examination of thin slices of bone. The study of living animals also sheds light on the past, and so Horner visits a pelican nesting ground to learn what it might reveal about whether (and how) dinosaurs nurtured their young. Horner often gives the reader a chance to puzzle out the meaning of a discovery before he offers his interpretation, as in a site where only the feet and lower legs of the specimens were preserved. One comes away from Dinosaur Lives with a healthy respect for Horner and his colleagues, whose discoveries and studies may be among the most fascinating endeavors in science.

Must reading for dinosaur fans.