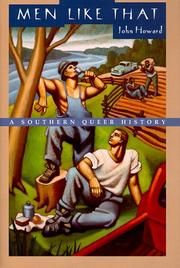 With a scrupulous eye for detail, Howard traces the evolution of homosexual identities in Mississippi from 1945 to 1985 and, in the process, offers a perceptive look into queer lives away from America’s urban centers. Howard (American History/Univ. of York, England) takes a twin approach in his history, recounting and contextualizing the oral histories of queer Mississippians, as well as uncovering queer lives through documents of historical record. Howard’s informants provide an insider’s view into how gay networks developed and evolved in rural Mississippi, how men found one another despite the manifold dangers of discovery involved. Concluding against the conventional wisdom that the 1950s were a period of sexual repression, Howard explores how queer men of the time carried on a lifestyle pulsating with sexuality, through an analysis of their lives at home, school, church, college, and work. He also argues that for gay men in Mississippi, the 1960s brought about a tightening of sexual codes (in order to combat racial activism), which ended with disastrous results for the many men whose lives and careers were ruined after they were exposed as homosexuals. The stories that Howard uncovers—the murder of a gay interior decorator in 1955, a congressman’s sex scandal, and queer rumors in a gubernatorial election among them—parade an eclectic cast of characters through the wilds of Mississippi’s queer life and the thickets of public opinion. Complementing Howard’s historical analysis is his reading of queer representations in the media, including physique art, pulp fiction, and Bobbie Gentry’s song “Ode to Billy Joe.” With his clear methodology and circumspect analysis, Howard creates a history remarkable in its complexity yet intimate in its portraiture. At long last an intimate and full vision of queer lives in America that did not unfold in San Francisco’s discos. (22 b&w photos)