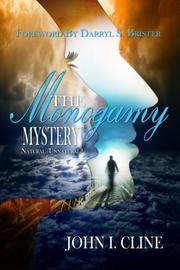 by John I. Cline

A Christian examination of monogamy.

In this thoughtful volume, Cline, a bishop at the New Life Baptist Church, looks at the challenges of marital fidelity in Christian life. Cline takes the position that monogamy as viewed in the contemporary Western world is not entirely biologically or culturally supported, given humans’ own wiring and the expectations placed on men and women during dating. He does, however, believe that monogamous marriages are ultimately desired by God, and to that end, he deals frankly and kindly with the challenges of monogamy and how to handle them. He examines nonmonogamy in the Old Testament, showing how various important biblical figures had multiple partners or committed adultery. He also considers the prevalence of infidelity today, along with its emotional, societal and familial impacts. Cline ends with the idea that “a bigger challenge needs a bigger solution,” looking at ways in which Christians can admit to the challenges of monogamy and recover from infidelity in their own relationships. In a particularly useful chapter, he presents “rules of engagement” for marriage, clearly stating his opinions on what marriage will and won’t do. A later chapter presents advice to young people beginning their dating lives with an eye toward how and if lifelong monogamy should factor into their choices and behavior. Overall, the book presents an honest, nonjudgmental look at an issue that can be difficult to discuss among Christians, and his prose is readable and good-hearted. Of particular use is Cline’s ability to draw openly upon his own experiences, which helps the book feel humanizing while avoiding moralization. Though readers outside Cline’s denomination may not totally agree with his framework, people of faith and nonreligious readers alike will certainly gain new perspectives from his unflinching exploration of relationships, fidelity and how to hold another’s emotions in a romantic relationship.